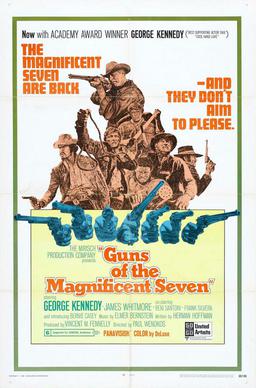 Tomorrow is the 60th anniversary of the release of the original The Magnificent Seven, and this marks the end of my week-long tribute to the picture and its impact on the American western.

Timing was the biggest obstacle standing in the way of the second sequel. This was the year of masterpieces such as The Wild Bunch, Once Upon a Time in the West, True Grit and Butch Cassidy and the Sundance Kid as well as 100 Rifles, Support Your Local Sheriff, The Undefeated and Tell Them Willie Boy Is Here. I reckoned – as I explained in my book The Gunslingers of ’69 – that it was the best-ever year for westerns. But in the face of such competition there was little room for a retread of a retread.

The budget had been reduced even further from the first sequel, now down to a paltry $1.36 million. Director Paul Wendkos had only made two movies in the previous five years, low-budget programmers Johnny Tiger (1966) and Attack on the Iron Coast (1968), and was best known for the innocuous Gidget (1959). Yul Brynner ruled himself out and his place was taken by George Kennedy, making the step up from supporting actor to star, who had gained acclaim – and an Oscar – for Cool Hand Luke (1967).

As before, being cast in the film presented opportunity. James Whitmore (Chuka, 1967), who had the second lead, was the best known but that wasn’t saying much. Apart from Joe Don Baker (Walking Tall, 1973) and Bernie Casey (Hit Man, 1972), none made a subsequent impact. Monte Markham and female lead Wende Wagner were both drawn from television, the former from The Second Hundred Years (1967-1968), the latter The Green Hornet (1966-1967). Making up the numbers were bit part players Reni Santoni (Anzio, 1968) and Scott Thomas (The Thousand Plane Raid, 1969).

The script by Herman Hoffman follows the same lines as previously. This time around imprisoned Mexican revolutionary Fernando Rey (who had played a priest in Return of the Seven) funds the recruitment of the mercenaries. As before, each recruit is afforded an introductory scene. There’s an expert in hand-to-hand combat (Markham), a former slave who is a dynamite expert (Casey), a one-armed gunslinger (Baker), a knife-thrower and a chronically-ill wrangler (Thomas). On arriving at their destination, the mercenaries become less mercenary. A village boy is adopted. The villagers can’t make up their minds whether to welcome or oppose the mercenaries. Wagner provides the love interest as a peasant girl.

Instead of defending the village, the gunmen and trained villagers storm the citadel where Rey is imprisoned. This is well-executed with the help of a Gatling gun and explosives. However, Kennedy was miscast as an ice-cool killer. The picture also suffered from a dumbing-down of the violence. With a better cast and a stronger director, the material might have produced better results. However, as with its immediate predecessor, what’s mostly wrong about the second sequel is its inferiority to the original. Take away those comparisons and like Return of the Seven it remains a very watchable oater.