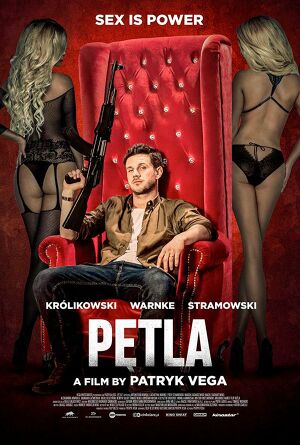 Ambitious young cop succumbs to corruption in a battle royal in Polish pimpland.

Director Patryk Vega is the bad boy of Polish filmmaking, a far cry from the austere heights of the arthouse-acclaimed Andrej Wadja (Ashes and Diamonds, 1958) or Krzysztof Kielowski (The Three Colours trilogy, 1993-1994). However, what’s often forgotten in our consumption of foreign films is that what we see are films that have been commercial hits in their own country – Fellini’s La Dolce Vita (1960), for example, was the biggest film of the year in its native Italy. But, somehow, with the advent of the arthouse circuit that approach to distribution seems to have passed us by. Although huge hits in Poland, Vega’s films are not only hard to find on the big screen but rarely reviewed.

Petla follows second generation cop Danila (Antoni Krolikowski) from innocence to depravity to redemption in a high-octane thriller. Even Scorsese and Tarantino would wince at some of the violence shown here but then Vega is dealing with a more vicious type of gangster than even the worst of the American Mafia or run-of-the-mill nuthead and, equally, has little truck with the pretentiousness that often mars the work of these two. Vega wants to tell a story and he does John Wick-style it with verve and pace.

Danila wants to be elevated to the prestigious detective division without putting in a decade of plodding. So he recruits twin minor Russian gangsters, wiping clean their slate in return for inside information on bigger criminals, in this case terrorists. At this point he is an upstanding, courageous cop, dealing with ineffectual superiors and often idiotic colleagues. Married, his wife expecting their first child, he resists temptation of the sexual variety.

Initial success leads him into the Subcarpathian netherworld of sex for sale and he comes up with the bright idea of taking control of a brothel where he can spy on the rich and powerful clientele with the idea of exposing the ministers, businessmen, priests and government officials who use the premises. Soon high ideals turn into individual enterprise and, funded by the Russian GRU, he sets up a high class brothel, the Imperium, to film the goings-on and blackmail the clients. He begins a slide into excess that leads to paranoia and loss.

Getting to this stage involves a fair deal of elimination of the opposition, including an extremely violent Englishman, Ukrainian thugs and a prominent boxer. Sometimes pure violence is the optimum method but occasionally it is psychology, seducing, for example, the abused wife of the boxer in order to parade the romance, a technique that results in the mental disintegration of the seemingly invincible prizefighter.

But Danila has enemies. In true Vega style, these usually start out the film as friends or sexual partners. In this instance a female prosecutor Alicja (Katarzyna Warnke from Botoks) is on his case in revenge for being cast aside.

One of the hallmarks of a Vega film is that women often come out on top, previous examples being Botoks (2017) and Mafia Women (2018). While there is certainly a lot of misogyny and in Petla, in particular, the whores are treated abominably, he has put the spotlight on a whole tribe of strong women who show as little remorse as their male counterparts and are as equally likely to endorse or participate in brutal acts of violence. Here, to get Danila’s wife to rat him out, the prosecutor arranges for the wife to be seduced by a handsome stranger.

Both genders are treated with compassion, another Vega hallmark. When Danila descends into paranoia, Vega cleverly switches the audience away from delight at this retribution into sympathy for his predicament once he begins to seek redemption. In truth, he has earlier been portrayed as a rounded individual, his delight at becoming a father very evident. Men are never so good at emotion as women and it is the shots of the distraught Alicja that put us firmly on her side even though she is originally portrayed as ruthless in matters of the heart, demanding that Danila cast his wife aside (“I don’t like competition”) before enjoying her sexual favors.

And it would not be Vega without swipes at official incompetence and limelight-seeking bosses. Danila’s boss ignores his first anti-criminal triumphs because they were not media-friendly and at one point the entrapment and capture of a terrorist by said boss has to be done again because the cameras did not work first time round.

Black humor is never far away, either. As a beginner cop, Danila is told never to look into the eyes of a dead person. So he is relieved to find that the first corpse he encounters has his head blown off. Farmers threaten to stab him with a pitchfork unless he gives the kiss of life to a dying man – blowing air into the man’s mouth only results in blood flowing faster from his wound. Cops routinely make stupid errors. Invading a thug’s house stun grenades missing the target deafen the cops instead.

And the film has a sting in the tail, the enterprise turning out not in the way it was surmised. Petla is based on a true story, although Vega has clearly taken liberties with the reality. Even if wholly fictional, it would be believable, Vega having the ability to invest the maddest of schemes with authenticity because the characters in his pictures are invariably so human and believable. the title, by the way, is translated as Noose.

There are a couple of anomalies in the film’s marketing. The poster is pretty explicit “sex is power” but the trailer focuses instead on Danila and his wife with sex and violence very muted.

Polish films are hard to come by on the big screen. Sometimes they only play a couple of days in a particular cinema. I saw this as the second part of my Monday night double bill this week – the other film being Bill and Ted Face the Music – but whereas I caught the first at the Odeon I had to high tail it to a Cineworld to catch the Polish film.

If you want to sample Vega’s wares before committing to a big screen outing you can see his debut Pitbull (2005) on Youtube.