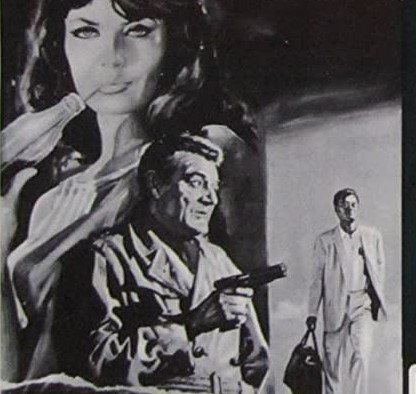 Made just before director Basil Dearden embarked on Khartoum (1965), this is probably best-known these days for being screenwriter – and ace self-publicist – William Goldman’s first credit. It’s based on Castle Minerva by Victor Canning whose previous filmed books included The Golden Salamander (1950) with Trevor Howard, The Venetian Bird (1952)  with Richard Todd, and The House of the Seven Hawks (1959) with Robert Taylor.

I’d like to say this is a self-aware thriller with spy and comedic elements but it veers awful close to either a cult film or a mess. Basic story has Cliff Robertson hired by former wartime commander and now British intelligence agent Jack Hawkins to look after an Arab princeling who has been kidnapped by the British (so much for Brits always being on the side of the angels) to help seal an oil concession in the Gulf.

Theoretically, the kidnapping is for the teenager’s own good, to prevent him being assassinated before he ascends to the throne…see it’s getting awfully complicated already. Anyway, it turns out he actually has been kidnapped by Hawkins who has turned rogue in order to fund his retirement. The boy is held in some kind of fortress/castle in Spain and then another more sinister one.

Robertson, who looks half the time as if wondering how the hell he got into this, meantime falls for the seductive charms of Marisa Mell who he thinks is a smuggler intent on stealing his boat but a) is part of the kidnap gang and b) in love with him enough to help him escape when he in turn is captured.

Did I mention the film also included a circus, a clown act, a gunfight on a dam, characters left dangling on a rope bridge, a lady in red, a balancing act along a perilous ledge, entrapment in a wine tanker (huh?) and an animal cage (double huh?), a vulture, men in bowler hats…

It is enlivened by visual gags – ultra-large footprints (from somebody wearing flippers). The dialogue sparkles as when the prince, with an overactive entitlement gland, says, “I am practically divine,” to which Hawkins deadpans “Your Highness, you are irresistible.” Add to that various cliché-twisting scenes – the double-dealing Marisa Mell now overcome by love, says to Robertson: “Ask me anything you want and I will tell you the truth,” but every question he asks solicits the response, “I don’t know.” Then, imprisoned in a cage, after protracted cobbling together of lengths of bamboo to steal keys they turn out to be the wrong keys.

Throw in British propriety  – Robertson’s substantial fee for risking his life is reduced to a miserable sum once tax has been deducted. And a superb Arab charge on horseback with tracking cameras, either a rehearsal for Khartoum or the scene that got Dearden the gig.

Actually, the more I write about it the more fun it sounds and I wish it were, but it does not quite gel. Robertson and Mell don’t convince – Robertson talks through gritted teeth without suggesting he has much inner grit – although Hawkins and other British stalwarts like Charles Gray and Bill Fraser and Frenchman Michel Piccoli deliver the goods. It should have been a straightforward three-star job or – if qualifying as a cult – in the five-star class. It is definitely not an outright stinker. Perhaps best filed under “curiosity.”