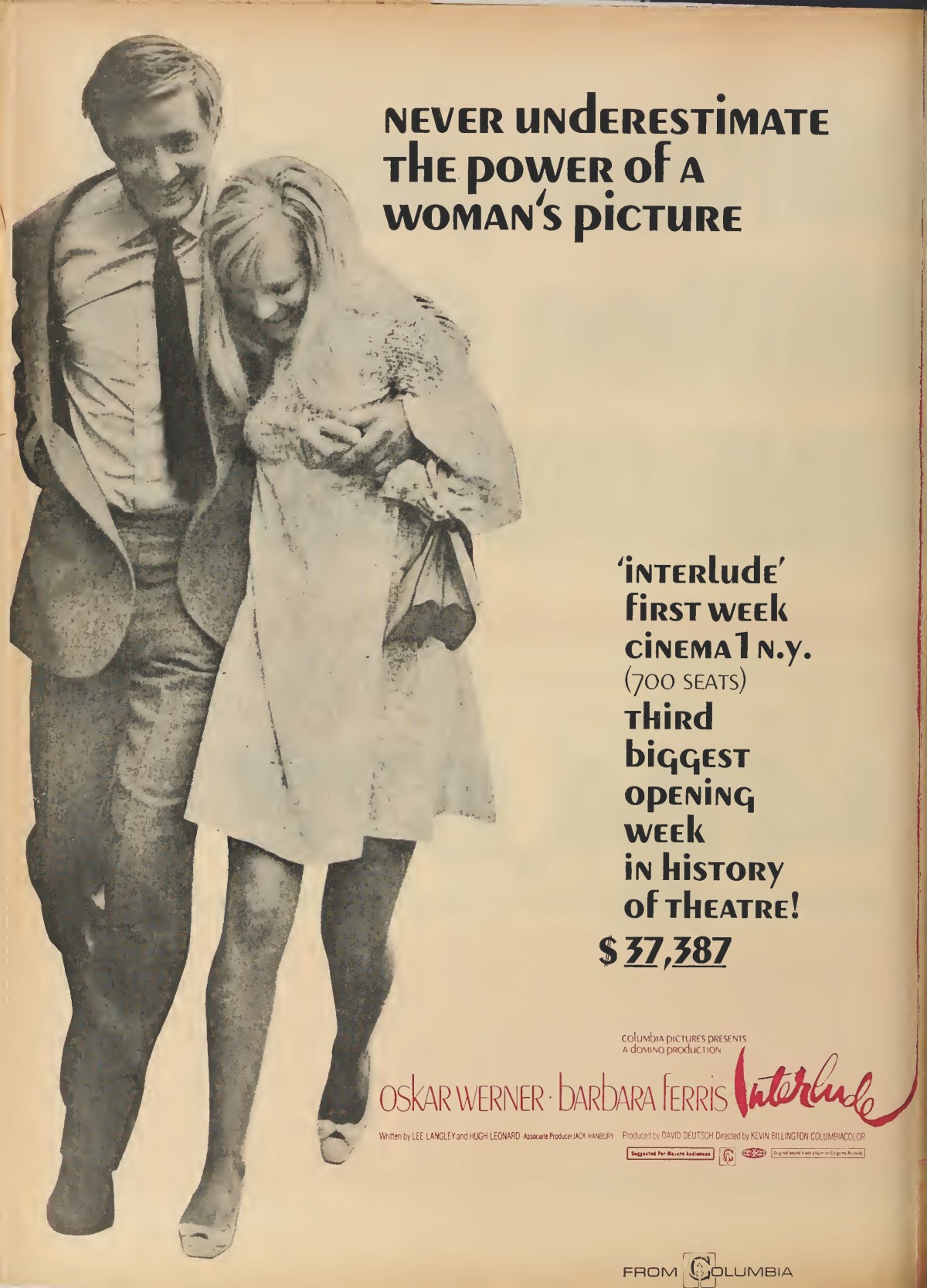 Kevin Billington’s debut benefitted from a brief fad for classical music soundtracks, Elvira Madigan kicking off the fashion the year before, 2001: A Space Odyssey, which opened at the same time as Interlude trumping everything in sight. And as luck would have it, this was not the only movie about an orchestra conductor, Counterpoint with Charlton Heston released in America a couple of months before this one opened in Britain.

What makes the movie so enjoyable is that overlaying the sumptuous love story is the angst of a mistress. It’s sweetly set in wonderful British locations, riverside inns, olde worlde hotels, trendy restaurants, a few flashes of swinging London, luxurious mansions. The solid backdrop for something as fragile as romance.

There could not be two more opposites to attract, the rich Oskar Werner (Jules and Jim, 1962) in full-on arrogant mode, all dark glasses and leather gloves with enough petulance to sink a barge, and journalist Barbara Ferris (off screens since the lamentable Catch Us If You Can three years before) who lives in a bedsit with a goldfish called Rover. He drives a Rolls-Royce convertible, she a Mini.

There are some very good touches. We first see the characters in mirrors. He plays a “concerto for wine glass and index finger.” There is the very serious British business of whether milk goes in first to a cup of tea.

The screenplay by Lee Langley and Irish playwright Hugh Leonard is sharp and often witty.  “I want to marry you,” says Ferris, before conceding, “I just don’t want to be your wife.” There is clear realization of the nature of his personality in her remark, “Instead of being what you want, I’ll be what you’ve got.”

Even when emotion is expressed there is a feeling that a lot is still suppressed. Ferris goes from high excitement to high dudgeon and carries within the seed of fear, a character who spends as much time in terror as in love. This is exacerbated when she spots of Werner’s wife, stoically played by Virginia Maskell, at the hairdressers and “all of the sudden” the wife who has existed in her imagination “has a face.”

John Cleese and Donald Sutherland have decent cameos, the former in a bit of an in-joke as a PR man wanting to get into comedy (“satire – that’s my field”), the latter as the womanizing brother of Werner’s wife.

Oddly enough, the music – Beethoven, Tchaikovsky, Mozart, Dvorak, Brahms and Rachmaninov – acts in the same manner as Easy Rider the following year, as extensive interludes to the developing drama. Perhaps it is where Dennis Hopper got the idea.

It is very rounded for a romance, the acting excellent and the undernote of despair well-wrought.

I caught it for free on Talking Pictures TV, but I’m not sure how often it is being scheduled. Otherwise, here’s the DVD link.