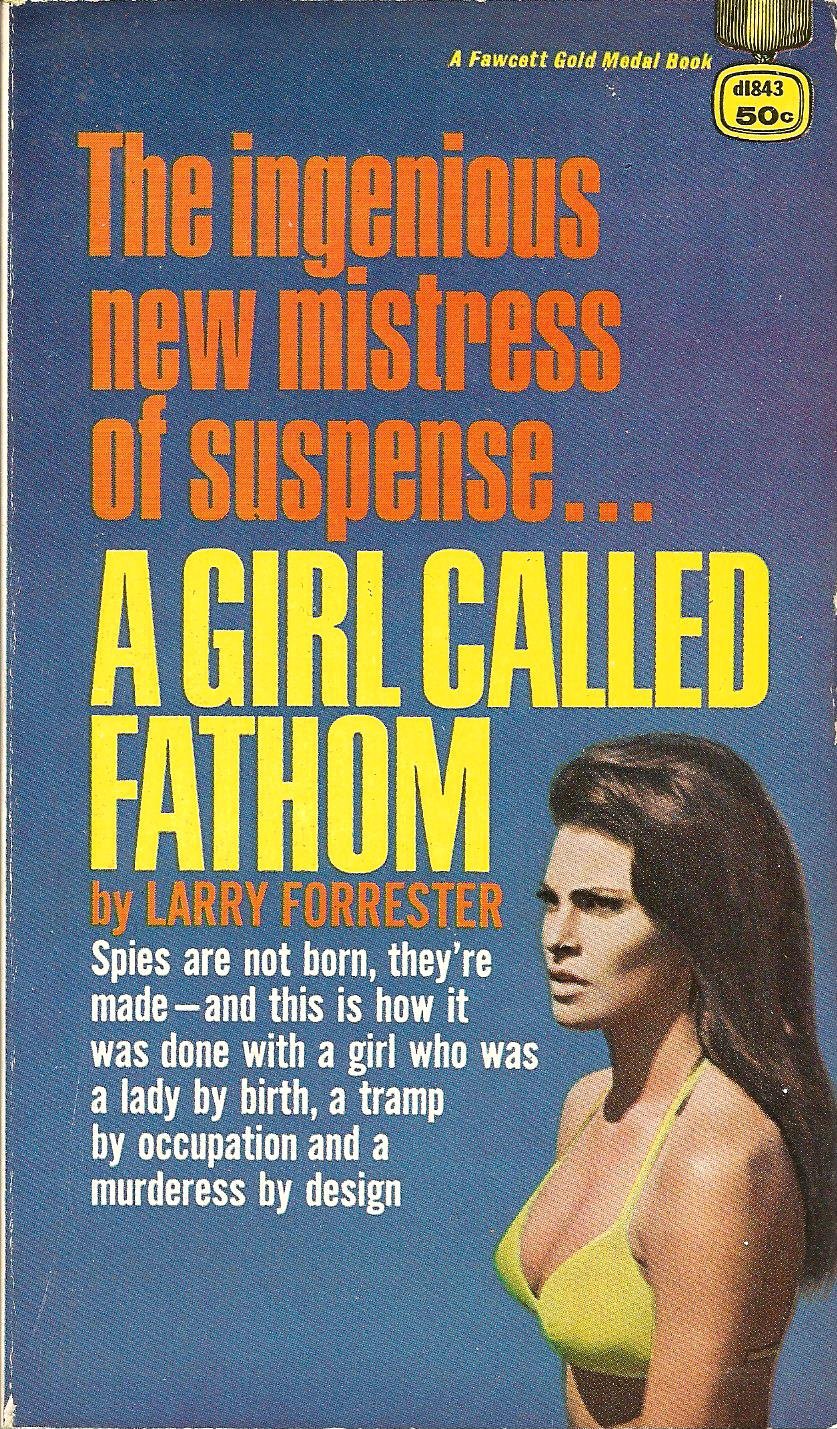 The blurb gives the game away. The British paperback published by Pan went: “She was blonde. She was beautiful, she was six foot tall. She’d killed the man who had dragged her to the lowest depths of addiction and lust.” The American Fawcett Gold Medal paperback was more succinct: “lady by birth, tramp by occupation and murderess by design.”

If any of that rings a bell, it was not from the film Fathom (1967) starring Raquel Welch which chose to ignore her background and her venomous skillset. The novel opens with the heroine killing a man in cold blood. He had promised her a film career but turned her into a call girl and heroin addict. Her father, now dead, was in the British secret service.  Once she has committed her first murder, she is immediately kidnapped by a secret organization (C.E.L.T.S. – Counter Espionage Long-Term Security) and trained to become an even more ruthless government-sanctioned killing machine.

Larry Forrester was a Scottish television scriptwriter who had worked on a stack of British series such as Whirligig (1953), Ivanhoe (1958) and No Hiding Place (1960-1964) before publishing his first novel A Girl Called Fathom. His sole screenplay was Tora! Tora! Tora! (1970) after which he concentrated on U.S. television including episodes of Fantasy Island (1980-1983) and Hart to Hart (1983-1984).

A Girl Called Fathom is split into two. Comprising roughly two-fifths of the book, the first section concentrates on her brutal training and on getting her off drugs. There’s a fair amount of sexual intrigue not to mention sex. But also a lover’s betrayal.  For the final part of her training she is abandoned in the middle of nowhere in scorching heat and barely makes it home. “She had passed over a great divide. She was empty, hard – dehumanized. Alone. She would always be alone.” And then she is forced to kill again.

As was common with this kind of book in the 1960s, it was fast-moving and globe-trotting with plenty of realistic detail to offset the preposterous plot. For the remainder of the book, which shifts location to Europe, Fathom is up against an organization called W.A.R. (World of Asian Revolution) which aims to destabilise the existing world order. Her arch enemy is an American-born Soviet agent (and whip and knife expert) Jo Soon (who turns up in the film Fathom in slightly different form as Jo-May. Fathom’s team must protect French elder statesman Paul-Auguste Valmier whose playboy son Damon (who fantasizes about burning people alive), a friend for her past, is her main contact.

The book is peopled by interesting and occasionally outrageous characters – for example Tin, who has hardly a human bone left in his body; the far-from-harmless Aunt Elspeth; and a sadistic colleague who loves her but dare not let his emotions out lest he loose on her his love of pain. The central plot is driven by a mass of twists and turns, heroine endangerment, fights with knife and gun and fist, traitors (naturally) and the clever idea of killing off the leaders of the free world with a bomb hidden in the coffin of a man worthy of a state funeral being held in Paris.

At the end she is counting the human cost of victory and sees herself as one of the walking wounded, a reject, driven from the herd.

The film Fathom was apparently based on an unpublished sequel so it’s conceivable that the plot concerning the Chinese heirloom was pulled from that in its entirety. But even so the film’s heroine was neutered, not a patch on the ruthless killer with a sordid past outlined in A Girl Called Fathom.

A review of Fathom (1967) was published in tandem with this.