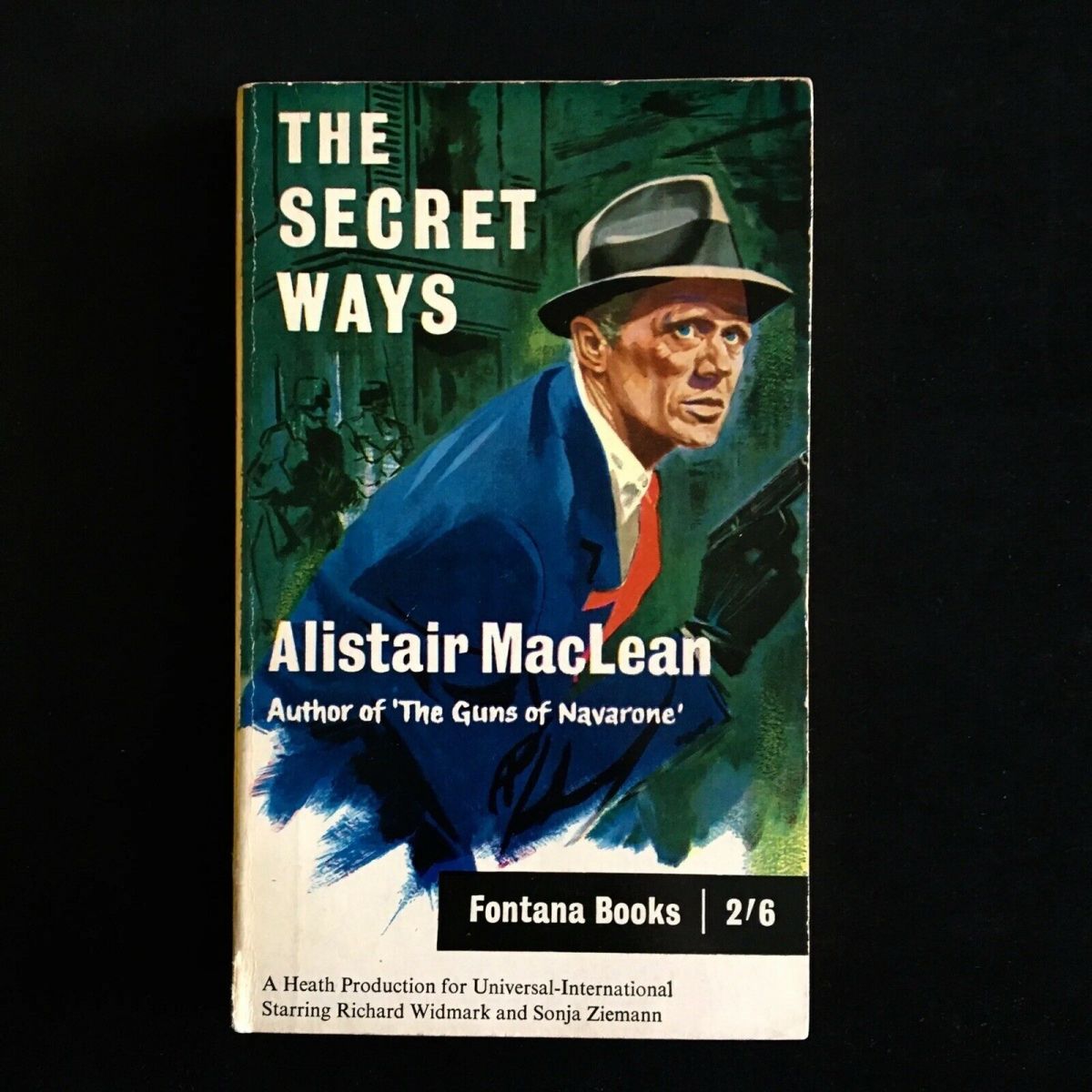 You might ask yourself why star Richard Widmark bought the rights to Alistair MacLean Cold War thriller The Last Frontier (title changed to The Secret Ways for American publication and the film) if he was going to ignore so much of the author’s brilliant story. In the original version hero Reynolds (the Widmark character) does not simply fly into Vienna as in the film, but has already crossed the Austrian border into Hungary in a blizzard after hitching a lift in a truck but now is stranded on foot in sub-zero temperatures, 30 miles from Budapest. This is not the only change authorized by Widmark, wearing his producer’s hat.

His Reynolds is a freelance gun for hire clearing a gambling debt and hired by an American spy ring compared to MacLean’s British secret service agent, intensely trained for 18 months for this mission. The mission in MacLean’s book is to rescue/kidnap British scientist Professor Jennings, the world expert on ballistic missiles, with the help of Hungarian resistance leader -Hungary at the time part of the Soviet bloc – Jansci (Wolf Rilla). Widmark eliminated all mention of Jennings. Instead, the task facing his Reynolds is to get Jansci out of Hungary. Widmark’s Jansci is still a resistance leader but doubling up as the professor albeit a straightforward scholar with nothing to do with missiles.

Combining characters was not unusual in the movie business and Widmark may have deemed it necessary to streamline the plot. But if the idea was to simplify the plot, that hardly explained the existence of Elsa (Senta Berger). She was not in the book. Her sole purpose may have been to provide Widmark with casual romance – a testament in Hollywood terms to his irresistible attraction – early in the story.

This was Alistair Maclean’s first shift away from the trio of war novels, including The Guns of Navarone, which had rocketed him into the bestseller class, and it proved to be a major change of style that created the non-stop thriller template that would underpin the later Fear Is the Key (published in 1961), When Eight Bells Toll (printed in 1966) and Puppet on a Chain (1969 publication), all of which were filmed, which saw loners or secret agents enduring horrific physical abuse as they battled the odds.

MacLean’s Reynolds enters Budapest a captive, rather than as in the Widmark version merely catching a train. Widmark meets Jansci’s daughter Julia (Sonia Ziemann) in Vienna. But in the book the secret agent meets Julia, along with her father, after he is captured by the resistance. In the book Reynold’s kidnap occurs in the first 20 pages, in the film at the halfway mark. From the outset Maclean thrusts his hero pell-mell into action with nary a let-up but in the film the action is punctuated by romance and various political meanderings.

Perhaps Widmark shied away from the MacLean plot due to budget constraints for the novel is certainly more intense and continually action-packed. Starting with the blizzard and ending with a perilous river crossing, the novel has several scenes which would have looked stupendous on screen. The story Widmark ignored involved the scientist in danger of being removed from Hungary to be returned to the Soviet Union, forcing Reynolds to effect a rescue on board a train, in a devil-may-care episode worthy of James Bond, by separating one car from the rest. There follows a 400-kilometer chase to the Austrian border where, pursued by Hungarian secret police, they cross the river Danube. In a final twist, while the professor and Julia are safe, Jansci refuses to leave his native country.

In various blogs covering the transition of novel into screenplay, I have mostly understood why a screenwriter would delete, alter or embellish plot, characters, time scale and even locale. Sometimes the screenwriter simply comes up with a more believable plot (as in Blindfold) or is required by the sheer length of the novel to make considerable changes. It’s rare for me to think that the screenwriter has taken the wrong approach. I thought The Devil Rides Out could have done with more of the occult background in the Dennis Wheatley novel. Here, it’s quite obvious that Maclean had a far better storyline than the film Widmark chose to make, the blizzard, train and river crossing scenes far more exciting than anything in the finished picture. As I noted, money may have been the issue.

However, it’s just as interesting that Widmark and Co. managed to make an enjoyable picture by not following the original story. The role of gambler-gone-bad was more appropriate to the Widmark screen persona than a secret service agent (outside of the humorous Our Man in Havana, there were not many of those around until a few years later). The film did introduce Senta Berger to a wider audience and the plot as it stands made a lot of sense.

The book was published in Britain in 1959 as The Last Frontier. In America the same year Doubleday renamed it The Secret Ways. There was a Victor Mature western called The Last Frontier in 1955 – and the title had also been used in 1932 and 1939 – so unless  Richard Widmark had purchased the film rights prior to American publication and announced a name change, then I have no idea why the book title changed.