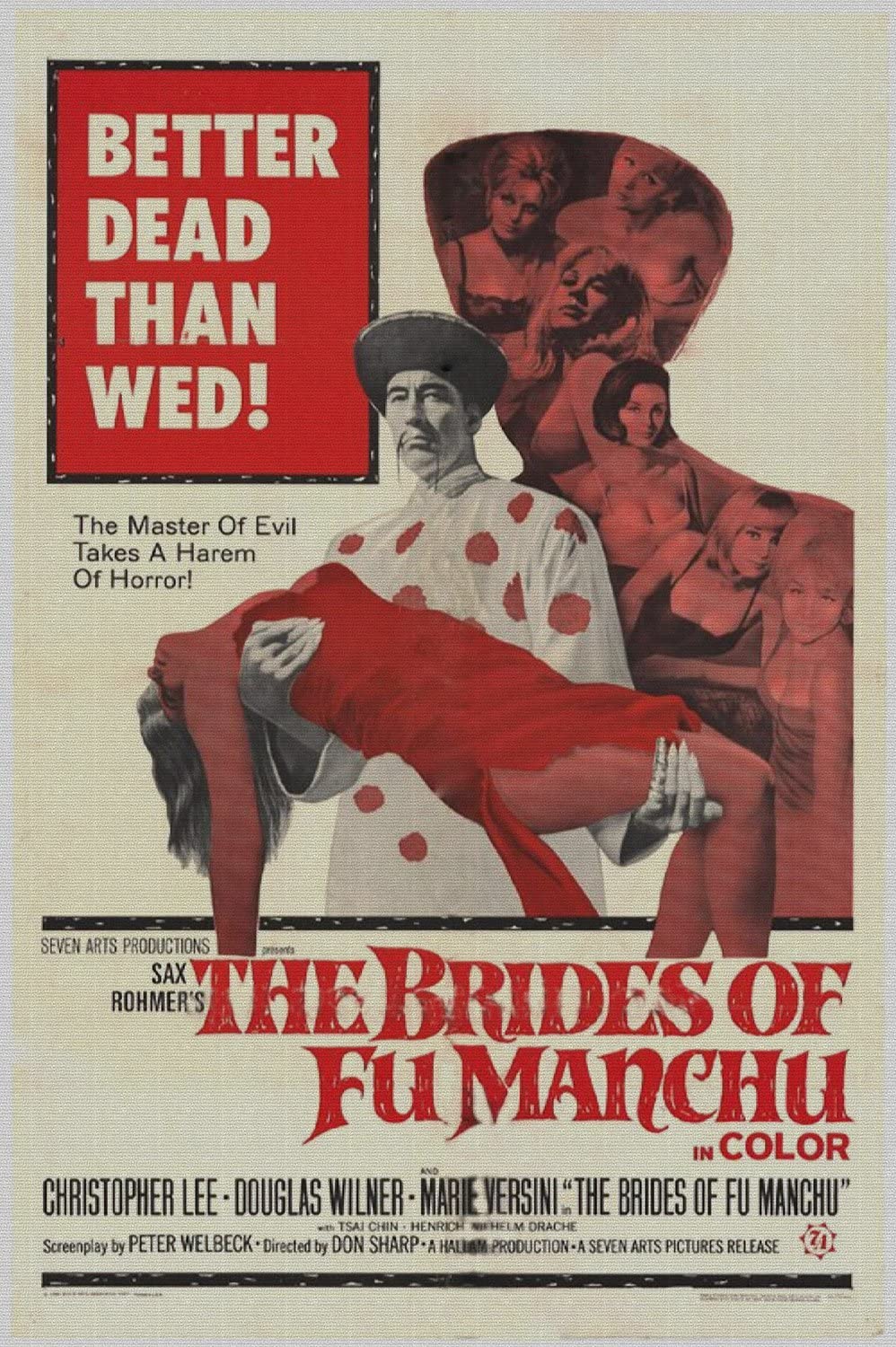 The 1960s was awash with movie megalomaniacs, most courtesy of the spy vogue. You could also count on secret agents for trailing in their wake bevies of beauties. So no surprise then that criminal mastermind Fu Manchu (Christopher Lee) has his own gang, his “brides,” although they are hardly volunteers, being the kidnapped daughters of top scientists. His plan for global domination this time consists of transmitting energy as sound waves, using miniaturization, a sonic death ray, with enough power to destroy a city.

The result is good hokum, a thriller set in the 1920s with a cracking pace, plenty of action, explosions, burgeoning romance, and  plot that gets more complicated by the minute as a tribe of worthies try out to outwit the evil genius. There is a terrific lair – where the disobedient end up in a snake pit – a passable laboratory, chases, truth serums (“the dust that loosens tongues”), hypnotism, bait-and-switch tricks and decent special effects.  Three stories race along in a parallel pell-mell: Manchu needs one more kidnapping to complete his complement of daughters; the good guys headed by Fu Manchu’s old adversary Nayland Smith (Douglas Wilmer) are trying to locate the bad guy’s secret location while at the same time attempting to find out where he will strike next.

While Fu Manchu is indestructible – supposed dead after the previous film – his henchmen (and henchwomen) are all too human. It takes three attempts to kidnap Manchu’s next victim. They are easily identifiable by their giveaway cummerbunds and bandannas and their method of assault is not kung fu but brawling so a good solid British punch of the old-school soon sorts them out. Manchu’s daughter Lin Tang (Tsai Chin) is a chip off the old block, delighted at any opportunity to torment the brides.

The brides wear diaphanous gowns that might have been a job-lot from the set of She, but are far from compliant, even rebelling at one point, and employing vicious fight tactics. Fans of director Don Sharp will find him every bit as inventive as in The Devil-Ship Pirates and Bang, Bang, You’re Dead. It’s another Harry Alan Towers (written under his pseudonym Peter Welbeck) production so that means an international cast. Two television cops, British Rupert Davies (BBC’s Maigret) and German Heinz Drache (cop in a Francis Durbridge series), plus Francois Mitterand’s brother-in-law Roger Hanin, provide solid support. Not forgetting Burt Kwouk as a henchman. Brides of the Year include French Marie Versini (German western Winnetou, 1963) and Rhodesian Carole Gray (Curse of the Fly, 1965). The film did not prove much of a jumping-off point for other brides such as Ulla Berglin, Danielle Defrere and Anje Langstraat, for whom this debut was as far as their careers went.

Christopher Lee, despite the dodgy moustache, is resplendent, exuding evil, and with a gift for rising again (just like Dracula) as he would do for another three films in the series.

Note: The Devil-Ship Pirates and Bang, Bang, You’re Dead are reviewed on this blog.