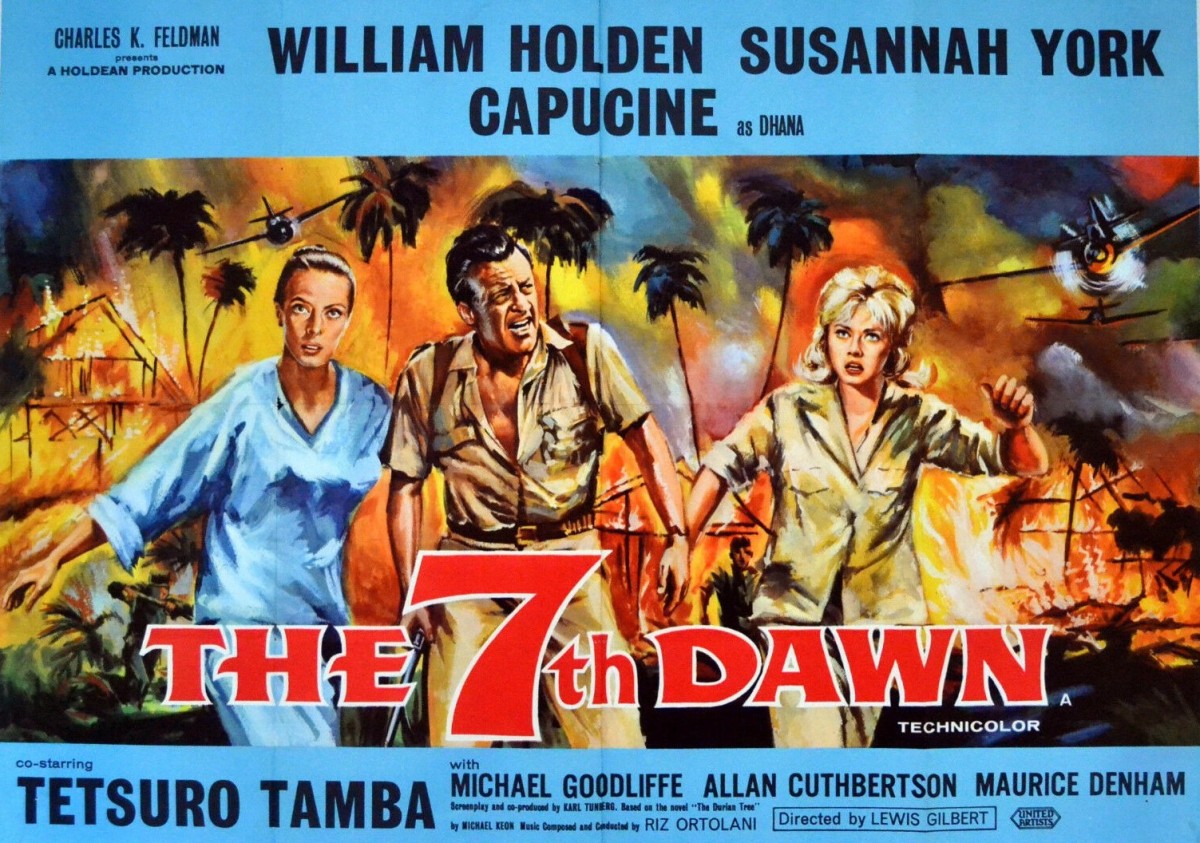 Women are the sacrificial victims here, the collateral damage as men of high principle battle for supremacy, politics held in greater esteem than relationships and family ties, a father willing to endanger his daughter, a lover viewing the potential death of his beloved as  publicity coup. Unusually, for a war picture, this is more about repercussion than heroic success. And it was well ahead of its time in taking a far more thoughtful, not to say probing, approach to the genre. Unusually, too, each of the main characters is driven by mistaken belief. It is very much a film where the surface is merely the patina to draw an audience into something more serious underneath and deserves considerable reappraisal.

Set in 1953 in Malaysia when the ruling British government was getting ready to pass over independence to the natives before they took it for themselves. Major Ferris (William Holden), a successful rubber plantation owner, is asked by incoming British High Commissioner Trumphey (Michael Goodliffe) to reach out to terrorist leader Ng (Tetsuro Tamba), a wartime friend and former rival in love for Dhana (Capucine), now Ferris’s mistress. Ng, wishing to ensure Communist dictatorship rather than western-style democracy, refuses to end the guerrilla war.

On his return, Ferris comes across governor’s daughter Candace (Susannah York) swimming naked close to a road notorious for ambush and murder. Meanwhile, Dhana, a teacher, has organised a demonstration to protest the imposition of a curfew. On hearing her out, Trumphey overturns the ban, only for that evening’s function at the embassy to be interrupted by a grenade. In reprisal the British torch a village where they suspect bombs are hidden, the action justified when several houses suddenly explode.

When Dhana finds Candace and Ferris together, aware of his previous infidelities, and shocked by the destruction of the village, she runs away to join Ng, who still holds a torch for her. When she returns, reconciling with Ferris, she is arrested after grenades are found in her bicycle. She is sentenced to death unless she informs on Ng, which she refuses to do.

Candace, with the conviction of the young, believes she can bring about Dhana’s reprieve by offering herself as a hostage to Ng. The terrorist leader in turn promises to kill Candace on the day Dhana is executed. So Ferris, believing the grenades were planted by the British, treks through the jungle to capture Ng, rescue Candace and return before the “seventh dawn” when Dhana will hang.

The governor refuses to bow to the terrorist threat while Ng confesses that he framed Dhana on the basis that she is expendable. Cause and principle run side-by-side neither man willing to give in to save a loved one.

Nor are the women passive, pawns in the great game, the film opening with Dhana wielding a rifle and closing with Candace firing one. Both are willing to die for their cause, Candace perhaps less willingly since she had not foreseen that potential outcome. So this isn’t quite a picture about impotent women but in the end both are powerless against the greater forces of a vicious struggle.

Lewis Gilbert (Loss of Innocence, 1961) creates a thoughtful, even-handed, picture, getting rid of the British sense of superiority so prevalent in pictures about the Empire, using the American Ferris to question many British attitudes, setting Ng up as a respectable, rather than heinous, terrorist who genuinely fears that his people will be unable to cope with sudden independence and require support from Moscow, and bringing to the fore Dhana who initially appears a makeweight in the tale only to become its central focus. A couple of exceptional close-ups reveal character far more than dialogue, Dhana when her execution draws close and Ferris on discovering who set up his mistress. It’s a tribute to his direction that the fabulous scenery fades into the background when laid down beside the tribulations faced  by the characters, each with so much to lose rather than gain.

William Holden (The Devil’s Brigade, 1968) is in his element, playing one of those characters that seem to come to easily to him, a man of questionable morals, happily profiteering from the misery of his fellow plantation owners, exploiting the wartime friendship with Ng that has saved him from ambush, forcing Dhana to cope with his infidelity, and yet with an upright core that spurs him into an action he deems stupid.

Capucine (North to Alaska, 1960) is the surprise package, with some superb subtle acting as she faces up to the prospect of dying for a crime she did not commit. Susannah York (Sands of the Kalahari, 1965) is perhaps too innocent, setting out to snare a disreputable man, and she could have done with two extra scenes – one explaining her thought processes in offering herself as hostage and another a confrontation with the father who abandoned her. Tetsuro Tamba (You Only Live Twice, 1967) delivers a thoughtful performance as the man torn between friendship and love and carrying the weight of a nation’s expectation.

Oscar-nominated Karl Tunberg (Ben-Hur, 1959) wrote the screenplay based on the novel The Durian Tree by Michael Keon.