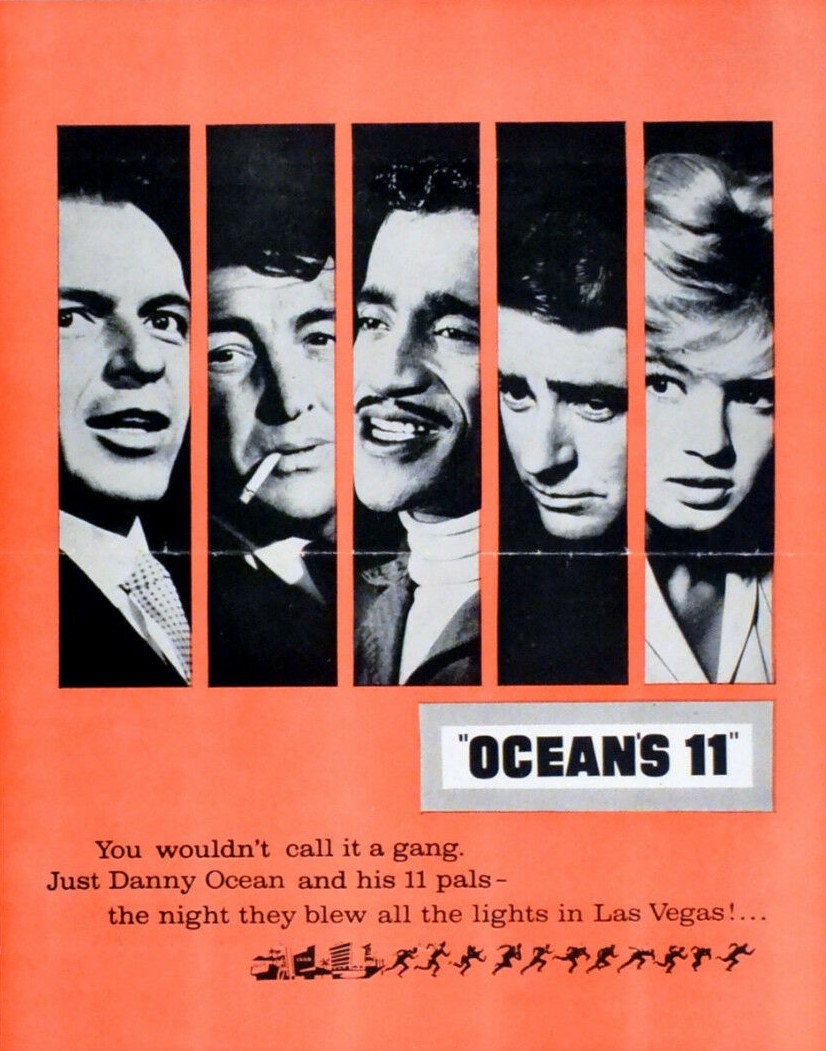 Heist pictures break down into planning, execution and reprisal. Here the planning stage moves at a leisurely pace, a bit of recruitment, and setting up bitebacks that will cripple the military-precision plan by ex-army buddies to rob five Las Vegas casinos of millions of dollars on New Year’s Eve. There’s a bit of reversal, Mr Big (Akim Tamiroff) is a collection of nervous tics, Jimmy Foster (Peter Lawford) a rich guy seeking financial independence from a possessive mother, Sam Harmon (Dean Martin) having second thoughts about the operation, and Danny Ocean (Frank Sinatra) trying to win back estranged wife Beatrice (Angie Dickinson) who surmises he prefers danger to intimacy. Mostly, it’s repartee between Harmon and Ocean while Foster makes a chump out of his mother’s next potential husband Duke Santos (Cesar Romero).

There’s not much hi-tech about the audacious plan, knocking out the electricity supply to the casinos, the switch to auxiliary power allowing the gang access to the inner sanctum where the cash is held, finding their way in and out of the darkness by nothing more sophisticated than luminous spray paint, and with a clever ruse to get the money out once all hell breaks loose.

The fun starts when one of the team (Richard Conte) drops dead post-raid and it transpires Santos is a big-shot underworld figure who investigates the robbery on behalf of the casinos and starts tracking the gang down, leading to a pay-off you don’t see coming.

Given the comedy element, there’s no great tension but it’s a pleasant enough diversion and Sinatra and Martin display an easy camaraderie that lights up the screen. It could have been funded by the Las Vegas Tourist Bureau so much attention is given to the wonder of the casinos, at a time when gambling was still only otherwise legal on racetracks, and with snippets of floorshows and the deluxe atmosphere. Add in a couple of numbers delivered a couple of times by Dean Martin (“Ain’t That a Kick in the Head”), legitimately since he is a cocktail bar singer, and Sammy Davis Jr. (“Eee-O-11”), somewhat shoehorned-in given he is a truck driver.

There’s a couple of neat reversals: Ocean’s dumped girlfriend Adele (Patrice Wymore) gets short shrift from Beatrice when she reveals the affair; casino bosses offered a double-or-quits gamble refuse to consider such a dangerous notion. Red Skelton and George Raft have credited cameos, Shirley MacLaine does not. As well as Richard Conte, Henry Silva (The Secret Invasion, 1964) has a small part as does Norman Fell (The Graduate, 1967).

Although there are on occasion outdated sexist attitudes, there is also a strong anti-racist statement in the hiring of Sammy Davis Jr., showcasing his talents in a big-budget picture, and clearly making the point that he has been welcomed by stars as big as Sinatra and Martin.

And it’s worth also considering the picture in terms of early-onset brand management.  The “Rat Pack” was a loose group of entertainers which not only became a well-known stand-alone entity in its own right that celebrated what was considered “hip” at the time (assuming you excluded Elvis and his ilk), but as individuals supported each other on television and in live performance. They would make another two pictures as a team and another dozen or so where two or more of the players appeared. The principals were all major attractions at the nascent Las Vegas so they were also promoting their home patch. During the day they made the movie, at night they wove in and out of each others’ acts, creating an entertainment sensation. On top of that, Sinatra had his own record label Reprise – among the early acts Dean Martin and Sammy Davis Jr. So, in a sense, all this cross-promotion was money in their pockets.

Also of note are the opening and closing, the former for the credits devised by Saul Bass, the latter for the famous shot later appropriated by Quentin Tarantino for Reservoir Dogs. Ironically, Lewis Milestone, who devised the original shot, and long before that won two Best Director Oscars, is less well regarded these days than Tarantino.