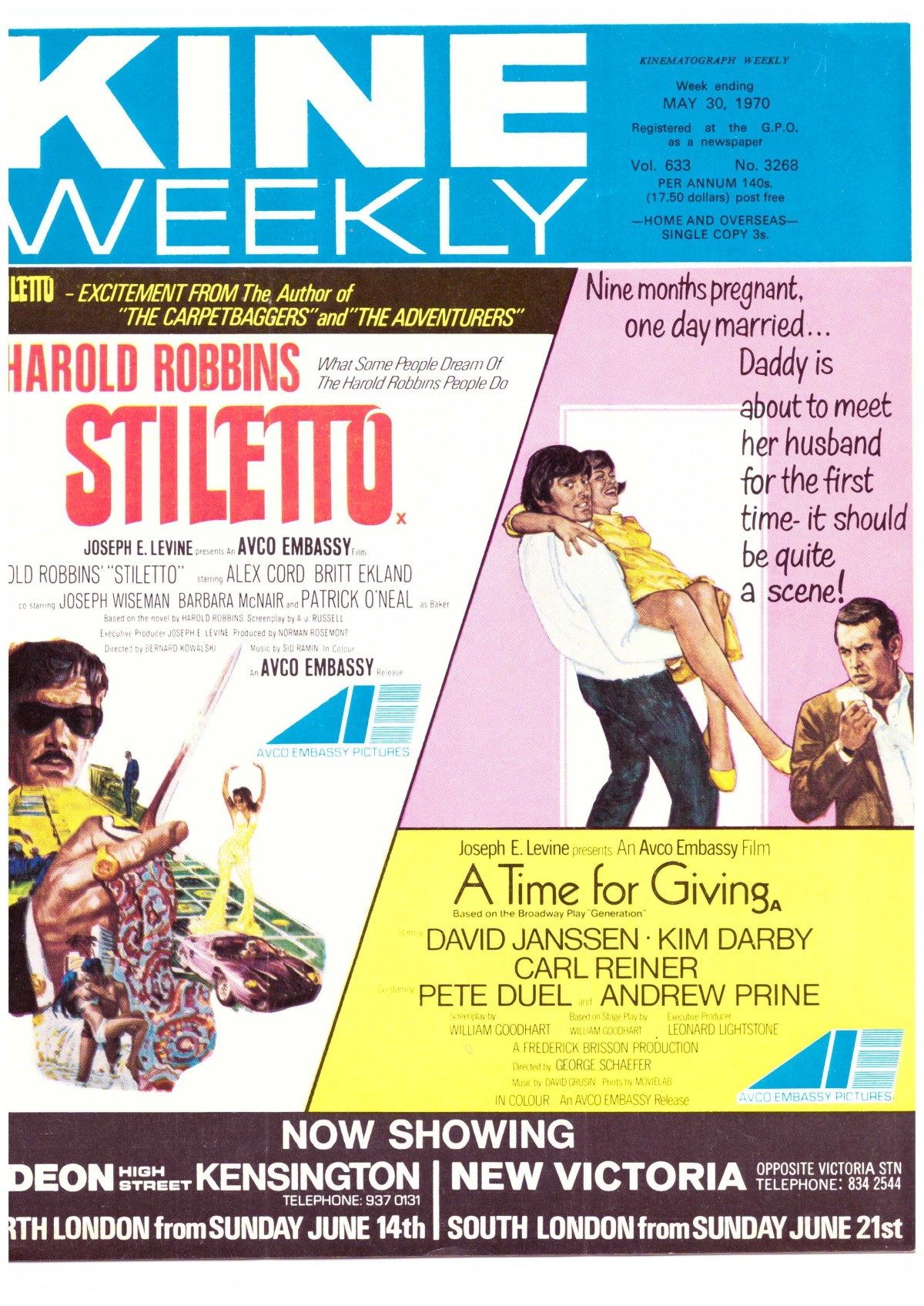 Tough talking Patrick O’Neal (Castle Keep, 1969) whose “hello” is usually accompanied with a fist enlivens this adaptation of a slim bestseller by Harold Robbins as cop George Baker on the trail of Mafia hitman Count Cesari Cardinali (Alex Cord ). Unusually, Cord was the go-to star for producers of Mafia pictures, his previous movie being The Brotherhood (1968). Equally unusual, Cardinali is a part-time assassin, spending the rest of his time as a fun-loving playboy with a string of women, fast cars and racehorses. Only problem is he wants to retire – and not in normal fashion, weighted down by a block of cement. Unfortunately, his dilemma is hardly one to solicit sympathy from an audience much less Mafia boss Emilio Matteo (Joseph Wiseman) and Cord isn’t enough of an actor in any case to tug at the heartstrings.

Cord made a brief splash as an action hero in the monosyllabic Clint Eastwood/Charles Bronson mold after debuting in the John Wayne role of the Ringo Kid in the remake of Stagecoach (1966) and Italian-made A Minute to Pray, A Second to Die (1967). But didn’t have more than half a dozen stabs at making his name on the big screen before disappearing into the television hinterlands. So he’s something of an acquired taste, maybe the small output enough to qualify him for cult status. Here, he’s a decent fit for the violence but saddled with a role that makes little sense and sure enough he soon discovers that Wiseman doesn’t consider him a candidate for a pension while O’Neal bullies witnesses into providing the legal ammunition to bring the gangster down.

One such person is illegal Polish immigrant Illeana (Britt Ekland), Cardinale’s girlfriend when he is not chasing Ahn Dessie (Barbara McNair). This is another thankless role for Ekland (Machine Gun McCain, 1969), there to add glamour, but, surprisingly, she manages to bring pathos to the part. McNair, who is always worth watching and had made an auspicious debut the year before in If He Hollers, Let Him Go, hardly gets any screen time.  But it’s O’Neal (Alvarez Kelly, 1966) as the ruthless cop who holds it all together.

Director Bernard L. Kowalski (Krakatoa, East of Java, 1968) proves better at the action than the characterization, though, luckily nobody needs to be anything other than tough. Three scenes, in particular, are well handled – the opening murder in a casino, a shoot-out at a penthouse and the climax on a deserted island which has more than a hint of a spaghetti western. Wiseman (Dr No, 1962) rustles up another interesting performance and Roy Scheider (Jaws,1975) also appears.

This old-style tough-guy thriller would have been better off had the Cord vs. O’Neal set-up taken center stage, with the assassin on murderous overkill hunted down by the zealous cop. As it is, it’s a missed opportunity for Cord to develop an Eastwood/Bronson persona and enter the action star hall of fame. This was the seventh adaptation of the books of bestseller writer Harold Robbins after Never Love a Stranger (1958), A Stone for Danny Fisher (filmed as King Creole in 1958), The Carpetbaggers (1964) – which also resulted in Nevada Smith (1966) – and Where Love Has Gone (1966).

This isn’t easy to get hold of but you are more likely to find it will find it on Ebay (new) than Amazon.