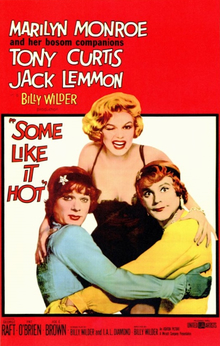 I caught this at my local arthouse a few days ago and it made me realise that big screen pristine prints have a way of making a movie pop and reminding you that movies were not meant for the constrictions of a DVD screen. It’s a trope to say everything is bigger on the big screen, but a classic like this is practically bursting at the seams, Jack Lemmon fizzes with energy, and you cannot take your eyes off Marilyn Monroe, nor any part of her, given her skin-tight (and Oscar-winning) outfits that must have given the censor conniptions.

Not surprisingly, there’s a lot more detail to notice, but what is revelatory is how detailed that detail sometimes is. There’s a tiny scene at the beginning of George Raft as gangster Spats closing a steel folding concertina door and you can see he is actually trying to make it close not pretending to do so. Attention to detail is what makes this picture sing. And there’s nothing more carefully constructed than the story. Sure, you can easily come up with some kind of mumbo-jumbo to make two guys cross-dress. But how to make it believable rather than pantomime? Easy enough to make them look like women and sound like women – but how to make them emotionally convincing? And to shift the story away from the obvious – fear of being found out.

Maybe you’re not familiar with the story so here’s the nutshell – two musicians having witnessed the St Valentine’s Day Massacre in 1929 dress up as women and hide out in an all-female band headed for Miami. There, Tony Curtis falls for Marilyn Monroe while Jack Lemmon finds himself/herself an object of lust from millionaire Joe E. Brown. Inevitably, they are rumbled, and they have to make the decision to keep on running or stay put.

The musicians hide out in an all-female band because if they try and hide anywhere else they will be easily caught. The female personalities they adopt are totally at odds with their male characteristics. Curtis, the womanising chancer, willing to risk everything on a horse, turns into a soft-spoken rather snooty woman lending a sympathetic ear to loser-in-love Monroe. And while admittedly this is originally for ulterior motives, it initiates a complete character change. Being a woman liberates Lemmon from his over-cautious male nature and he/she has a blast.  Feminists turn away now, but Lemmon get so into his new identity that he appreciates being wooed and spoiled and shrieks with pure joy at the prospect of getting married. Curtis, meanwhile, has a third identity to play to fulfil Monroe’s fantasy of falling for a harmless intellectual be-spectacled playboy complete with Cary Grant mannerisms.

And there are two versions of Monroe on show, the sexy showgirl and the sweet and tender lass. This is the final twist. In every Monroe movie under the sun she is the object of desire. Here, she is the one who has to make the running. In the end, everyone has to give up their fantasies and settle for reality – except for Joe E. Brown who does not care if he is marrying a man, “nobody’s perfect,” he snaps in one of the greatest last lines. So it’s a master class in character development.

But it’s also as funny as hell. And that’s without going down the route of easy laughs. The script – developed over a year by director Billy Wilder (Double Indemnity, 1944) and co-conspirator I.A.L. Diamond –  is a cracker and visual gags abound. There’s plenty of humour from the gender switch – Monroe cosying up to Ms Lemmon, Lemmon having his/her ass pinched, an over-confident bellboy making a pitch for Ms Curtis. And while Raft’s henchmen are straight from Stereotype Central, director Billy Wilder pays homage to the gangster greats – the idea for a minor character with a penchant for flipping coins lifted form a trick Raft himself used in Scarface (1931), the gangland supremo is Little Bonaparte instead of Little Caesar (1931), and Raft comes close to apeing Cagney in Public Enemy (1931) when he is tempted to squash a grapefruit into a confederate’s face..

You want exuberance, here it is in spades. Lemmon has turned the volume up to eleven, Joe E. Brown is continually on twelve, Monroe belts out a couple of great songs and if there was any limit on sexiness she breaks those barriers. And yet it is counterbalanced by Curtis’s myopic millionaire and the little-girl-lost Monroe. The kissing scene between Curtis and Monroe is so finely nuanced that you cannot help but be swept up in its innocence.

Curtis, who had just emerged from the Universal beefcake cocoon to gain more peer acceptance after his Oscar-nominated turn in The Defiant Ones (1958), did not quite gain the credit he deserved for his triple role, but Lemmon, who was Oscar-nominated, saw his career take off while Monroe, with a percentage of the gross, made a killing.

Of course, even such a genius as Wilder didn’t get everything right first time out. The original cast was meant to be Jerry Lewis, Frank Sinatra and Mitzi Gaynor. Go figure!

If you’re not lucky enough to live in any of these cities, your best bet is DVD.